Operation in vacuum allows the working temperature to be lowered. A short residence time of the medium is most advantageously achieved in film-forming apparatus designed for vacuum operation. An effect on the boiling point due to the hydrostatic height of the liquid is avoided in this case. In addition to the proven falling-film evaporator with free-flowing liquid film, ATR offers borosilicate glass thin-layer evaporators in this field.

The use of the thin-layer evaporator is advisable particularly for difficult evaporation problems, for example the working-up of the extract solution from solids extraction by the Soxhlet principle or for treating liquids of high viscosity. For example in the case of vitamins, hormones, enzymes or aroma substances, chemical changes having an adverse effect on the product quality can be avoided.

Wiped film evaporator -The wiper system produces a thin, thoroughly mixed product film on the evaporator surface. Depending on the feed rate, the viscosity and the speed of rotation, the thickness of the film is 0.1mm to 2 mm. This results in a short residence time for the medium, with the narrow residence time spectrum, within the working range of the evaporator. At the same time only very small temperature and concentration gradients arise in the thoroughly mixed film, that is to say the liquid vaporises immediately after it has absorbed the energy. In addition due to the turbulence in the bow wave in front of the wiper (peripheral speeds of upto 2.8 m/sec) and due to the continuous circulation, the heat transfer is improved. The light volatile substance does not need to reach the film surface by mechanical circulation, and the evaporator wall is kept largely free of deposits and encrustation.

Please contact us for our offerings of Thin Film evaporator and Short Path distillation systems. 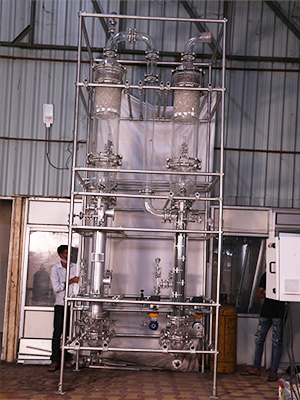