Sulfuric acid is used in many chemical processes where dilute and contaminated acid is produced as a by-product.

Some of the examples are:-

Sulfuric acid is concentrated by evaporating water. Due to the boiling behavior, different process solutions have to be found for three concentration ranges:-

The following advantages in comparison to other sulfuric acid evaporators are also in use:

In forced circulation, no evaporation at the heating surfaces, and therefore no or substantially reduced fouling of the heating surfaces. Higher heat transfer due to high liquid velocities in the heater, and thus smaller heating surfaces even for relatively small temperature differences between the heating system and the boiling temperature. Due to the flash evaporation the high evaporating duly is fully retained at any vacuum. Very reliable operation and rapid adaptation to fluctuating throughput requirements of 0 to 100% of the capacity is made possible by the relatively small hold-up; the plant can be started-up and shut down in a short time. Horizontal tube single pass evaporators are also used. In this type of equipment the waste acids are concentrated in stages in the chambers formed by the segment in a single pass. The disadvantage compared with the forced circulation system is the very much greater susceptibility to fouling.

For further concentrating up to 93-96% H2SO4 the type of equipment used for concentrating to medium concentration must be adapted to the changed physical conditionsin particular by :

Lowering the operating pressure or raising the operating temperature to conform with the sulfuric acid vapour pressure curve. Incorporation of a scrubbing column to remove the vaporized acid fraction from the vapour. The vacuum forced-circulation evaporator already described has also proved effective for concentrating up to 96%. The acid which has under gone preliminary purification by steam stripping is concentrated here in two stages to 96% H2SO4. The acid which has been pre concentrated to 85% in the first stage flows into the second stage-via the scrubbing column ; the vapour from this stage is compressed to the higher operating pressure of the first stage by a steam ejector 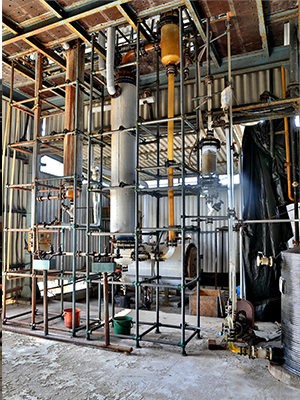